The strict theory of inductive communication is based on Maxwell's equations. Maxwell's equations are obtained through expansion and promotion on the basis of analyzing and summarizing the experimental laws of macroscopic electromagnetic phenomena. It reveals the relationship between the electric field and the magnetic field, as well as the interaction between the electromagnetic field and the charge and current, which is the general law followed by all macroscopic electromagnetic phenomena.

Suppose the propagation constant of electromagnetic waves in a passive, unbounded linear, uniform, and isotropic conductive medium is:

According to the theory of electromagnetic field, in a good conductor, as the frequency increases, the attenuation constant Î± increases, and the attenuation of electromagnetic waves increases. In inductive communication, the lower the operating frequency, the smaller the transmission loss and the greater the coupling loss; the higher the operating frequency, the larger the transmission loss and the smaller the coupling loss. Practice has proved that the working frequency of inductive communication is 50 ï½ž 500 kHz. 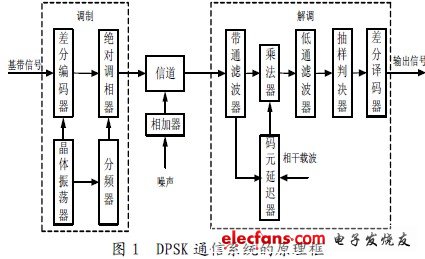 The modulator adopts digital modulation, which is composed of crystal oscillator, frequency divider, differential encoder and absolute phase modulation. The crystal oscillator generates a square wave signal, and the carrier signal and clock signal required by the modulator and demodulator are respectively generated by the frequency dividing circuit. Differential phase shifting uses the relative carrier phase changes of adjacent symbols before and after to transmit digital information, differentially encodes the digital signal at the input, and then performs absolute phase modulation on the differentially encoded output to obtain a 2DPSK signal.

The channel is one of the basic links of the communication system. The transmission quality of the channel affects the reception and demodulation of the signal. This effect is manifested in two ways: one is to generate noise, and the other is to weaken the signal strength and change the shape of the signal. In view of this, the DPSK signal in this design has noise superimposed during the channel transmission.

There are two methods for demodulating 2DPSK signals. One is the polarity comparison method, which is the coherent demodulation method. It extracts the coherent carrier, and then transforms the relative code into an absolute code through the inverse code converter. This design uses another method, the coherent carrier method, also known as the phase comparison method or the differential demodulation method. This method does not need to restore the local carrier, just delay the 2DPSK signal by one symbol interval, and then multiply the 2DPSK signal itself After being processed by the low-pass filter, the original digital information can be recovered by sampling directly. This method can be processed with the help of FFT in DSP technology, which is simple to implement and has good performance against noise interference. Demodulation is composed of band-pass filter, multiplier, low-pass filter, sampling decision device, and differential decoder. In the absence of noise, the signal recovered by demodulation is exactly the same as the signal input by the modulator.