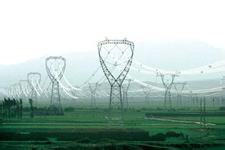 The National Energy Network pilot line for energy-saving conductors and Shizuishan "Henong-Baofeng 110 kV line" constructed by Ningxia Electric Power Co., Ltd. have entered the final stage of customs clearance and will be completed and put into operation in the near future.

The line has a total length of 12.8 kilometers and is built using double loops. It has a total of 47 base towers, and the project is estimated to have invested more than 13 million yuan. The use of medium-strength aluminum alloy strands is the first in the Northwest. The strength of all-aluminum alloy wire is 58.5%, which is 5.5% higher than that of common ACSR.

At present, China's transmission line construction is the most widely used is a round wire concentric stranded ACSR, aluminum alloy is less used. According to statistics, China's current line loss power consumption is over 170 billion degrees, equivalent to nearly 60 million tons of standard coal. In 2011, about 50,000 tons of aluminum alloy wire was used, of which about half were sold abroad. Aluminum alloy wire has three main advantages: First, the cost is lower than 40% of copper wire, which can greatly reduce production and procurement costs; Second, lighter weight, easier to install, construction is relatively convenient; Third, corrosion resistance, longer service life .

With the application of the National Grid Corporation's energy-saving lead pilots in Jiangxi, Hunan and Ningxia, the energy-saving lead will become the dominant power transmission in the future development of power grid construction.