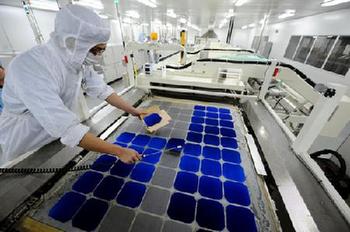 As one of the four major production bases of Yingli Group, it is also the most important new energy industrial base in Hainan. The Yingli Hainan Base in Shiziling Industrial Park of Haikou is inevitably involved.

The development of a green and clean photovoltaic industry is one of the important ways to compose a beautiful Chinese Hainan chapter and construct an ecological civilization in Hainan. How Hainan's photovoltaic industry responds to the EU's "double reaction" has attracted much attention.

The European Unionâ€™s "double counter-intuition" affects Hainan, thousands of miles away. "A butterfly in the tropical rainforest of the Amazonian Amazon River Basin in South America occasionally flaps a few wings and can cause a tornado in Texas in the United States two weeks later." It is about the most common interpretation of the butterfly effect.

Hainan is an important production base of China's photovoltaic giants. The butterfly effect of the European Commission's ruling in a paper will inevitably affect the photovoltaic industry in Hainan beyond the border.

"Hainan's photovoltaic manufacturing companies are mainly Yingli and Hanergy. The latter's target market is mainly in China. Therefore, about 99% of the shipments in the previous April came from Yingli," said Haikou Customs.

"This move will have an extremely negative impact on domestic PV manufacturing companies and drive up PV production costs. It will not only damage China's PV industry, but also affect European consumers and upstream and downstream industries." This morning, the headquarters Wang Zhixin, head of propaganda department of Yingli Group in Baoding, Hebei, said in a telephone interview with a Hainan Daily reporter.

Haikou Lion Ridge Industrial Park, one of the four major production bases of Yingli, is also the seat of Hainan Yingli New Energy Co., Ltd., a subsidiary of the Group.

Under the background of the reduction of financial subsidies by many countries in Europe in 2012, the â€œdouble reverseâ€ in the United States, and the slowdown in the growth of the global photovoltaic market, this achievement by Yingli fully demonstrates the global competitiveness of our high-tech enterprises.

"Obviously, it is precisely because of the hard work and hard work of the 500,000 PV industry workers in China that the cost of photovoltaic modules has been declining, and photovoltaic power generation is getting closer and closer to the public," said Wang Zhixin.

According to the latest statistics provided by Haikou Customs today, from January to April this year, Hainan exported 870,000 solar photovoltaic modules, an increase of 37.2% year-on-year, worth US$130 million, a slight increase of 3% year-on-year, accounting for the export of high-tech products of Hainan's foreign trade during the same period. 43.3% of the total value. The main export targets are the EU and the United States.

"The EU ruling definitely brings about adverse effects, but we are confident that the impact will be reduced to a minimum." Hainan Yingli relevant person in charge said.

Actively develop emerging markets such as Southeast Asia In the face of the EU's high stick, the domestic PV companies have not yet stood still, but are looking for solutions in advance. Yingli is one of them.

â€œDespite the current plight of the PV industry, the EUâ€™s decision is by no means the last straw to overwhelm Chinaâ€™s PV manufacturing industry.â€ Wang Zhixin believes: â€œThe EU's preliminary ruling will certainly bring about adverse effects, but the success or failure depends on the company itself. The Group is actively exploring potentials and increasing efficiency, striving to open up new markets and reduce dependence on the European market."

Yingli Legal Director Fan Zhenhua once stated that the Group's share of revenues in different regions has been adjusted this year. The proportion of European products in the company's products has decreased from over 60% in the past to about 40%, while the domestic market has steadily expanded and the emerging markets have developed. It is also relatively fast, but even with the average tax rate of 47%, the "double opposition" has a relatively large impact on the company.

Wang Zhixin revealed that in the first quarter of this year, the reliance of Yingli on the European market has dropped to 53%, and is expected to decline to around 40% in the whole year. Meanwhile, the Group is exploring emerging markets such as Southeast Asia and South America to diversify its dependence on a single market. Risks reduce the negative impact of the decline in European sales on the photovoltaic industry. Its wholly-owned subsidiary Yingli Green Energy Singapore Co., Ltd. will provide components for Malaysia's largest photovoltaic project.

In addition, with the gradual decline in the cost of power generation, the development of emerging markets is very rapid. Contributions from emerging markets have risen from 2% the previous year to nearly 10% in 2012.

At Yingli Group Hainan Base, since last year, the company has used its brand advantages to control and integrate upstream and downstream resources to increase bargaining power and expand market share, with a view to reducing the adverse impact of European and US trade policies by virtue of its own scale, complete industrial chain and technological R&D. lowest.

Hainan Yingli relevant person in charge revealed that the company is accelerating the breakthrough in key technology innovation and industrialization process, and continues to increase the investment in R&D of high-efficiency crystalline silicon solar cell technology, monocrystalline silicon growth, and high-efficiency low-cost N-type silicon solar cells and equipment. And speed up industrialization. â€œPandaâ€ N-type high-efficiency batteries have achieved an average photoelectric conversion efficiency of 19%, which is more than 1 percentage point higher than that of ordinary solar cells. The cost is lower than that of similar companies by more than 30%, which greatly enhances the competitiveness of the products.

At the same time, all members of Hainan Yingli carry out new materials, new processes and cost reduction activities. The â€œtwo reengineeringâ€ projects that optimize production processes and cost management, and the â€œtwo new and one downâ€ activities to promote new materials and new processes, have all achieved good results. Such as polycrystalline solar cell silver paste optimization project to promote the results of innovation, Zhengyin each piece of battery to save 20%, back to save 40% of each piece of silver, comprehensive calculation, saving 0.143 yuan per watt of battery, annual cost savings of more than 100 million yuan.

As one of the Groupâ€™s four major parks, Hainan Yingli also innovated its battery design last year, following the 0.2% increase in the photoelectric conversion rate the previous year. Hainan Yingli Technician Zhu Zhiwen said that last year there were 32 scientific research projects approved, 10 were promoted and the benefits were more than 200 million yuan.

The pace of innovation is far from stopping.

Entering the southern gate of Hainan's Yingli plant, the R&D office building that has begun to take shape has already taken off its â€œgreen clothesâ€, and the blue glass curtain wall has been exposed. This is the company's first photovoltaic building integration project. It is equivalent to a small photovoltaic power station and will meet the building's electricity demand after it is completed.

From manufacturing to â€œsmartâ€ manufacturing, Yingli took the first place in global shipments of PV modules last year when the industry â€œwas lamentedâ€.

Photovoltaic manufacturing, which has been rushing forward for nearly a decade, has collectively â€œwinteredâ€ since 2011.

Li Xiaogang, chairman of Hainan Tianneng Electric Power Co., Ltd. believes that the "double reverse" policy of Europe and the United States has forced the adjustment of domestic industrial policies to be more in line with the actual development needs of the photovoltaic industry. Affected by the inertia of industrial development, domestic photovoltaic manufacturers have been exporting for a long period of time. It has not entered the internal transition period until the last two or three years due to changes in external conditions. â€œThis kind of transformation is very painful, but it is very necessary. As long as it is right, the photovoltaic industry will usher in a bright future.â€ He said.

According to reports, from the fourth quarter of 2012, the demand for photovoltaic market has started to change. Under the â€œdouble reverseâ€ situation in the developed countries of Europe and the United States, the domestic policy of promoting photovoltaic applications gradually emerged.

Ms. Miao Liansheng, Chairman and CEO of Yingli Green Energy, stated that the stable development of the public utility market and the rapid development of the distributed power generation sector will most likely make China the largest solar market in 2013. It is expected that Yingliâ€™s domestic components will be exported in 2013. The volume will increase by more than 40% from 2012. The growth of Yingliâ€™s domestic market mainly comes from the supply of components of large-scale photovoltaic power plants in the northwestern provinces.

According to Liang Shaoming, Director of the High-tech Department of the Provincial Ministry of Industry and Information Technology, China, as the world's largest producer of photovoltaic modules, currently exports its products mainly to Europe and the United States, and is easily limited to people. "The potential of the domestic market is so huge that we must cultivate the domestic market so that the photovoltaic industry can have a future."

Li Xiaogang disclosed that this year the company will strive to build more than 80 MW solar photovoltaic power generation projects and wind and solar complementary demonstration projects in Haikou, Lingao, Chengmai, Yangpu, Tunchang and Sansha. After these projects are put into production, they can provide more than 110 million kWh of green power for Hainan each year. As of the end of 2012, Tianneng Power had nearly 50 MW of solar photovoltaic installed capacity in Hainan.

A number of industry experts said that although the photovoltaic industry currently faces industrial restructuring, overall, it does not affect the pace of development of the industry. Looking from a large perspective, the development prospects of the photovoltaic industry are clear, and deep adjustment will not change the long-term vitality of emerging industries; while the decline in product prices will reduce the cost of power generation, and the long-term benefits the development of the industry.

It is predicted that during the â€œ12th Five-Year Planâ€ period, Hainanâ€™s electricity consumption in the whole society is expected to increase by 14% annually, and in 2015 it will reach 30 billion KWh. The maximum load for unified adjustment in 2015 will reach 4.7 million KW, more than doubling from 2010.